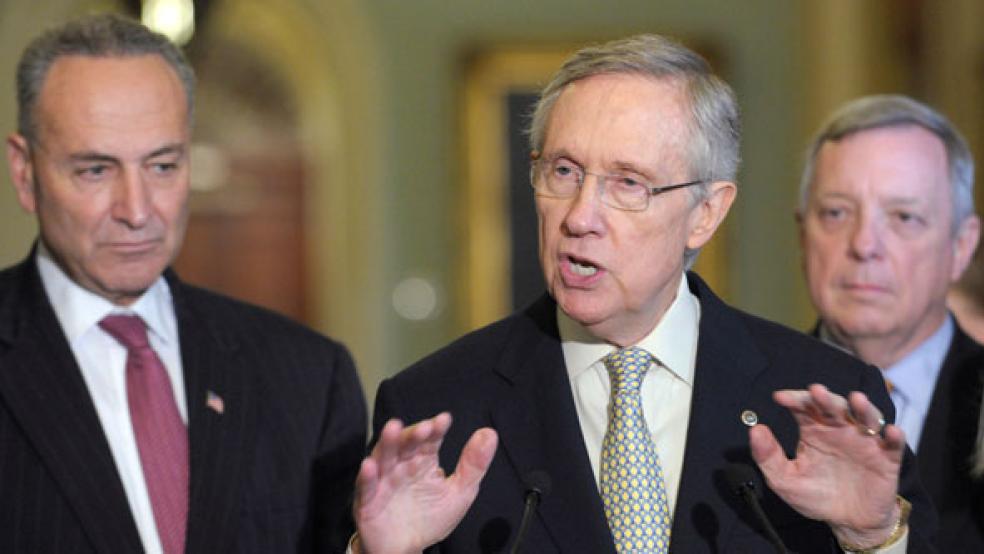 President Barack Obama and congressional Democrats are laying a political trap for Republicans to be sprung on Monday when the U.S. Senate is slated to vote on the proposed "Buffett Rule," which would slap a minimum tax on the highest-income Americans. With polls showing strong public support for the rule, Democrats plan to bring it up for a procedural vote in the Senate. Republicans are solidly against it and the proposal is not expected to garner enough votes to move forward.

RELATED: The Buffett Rule: A Gimmick Worth Debating

Even if it does advance in the Senate, it is not expected to be taken up in the House of Representatives, which is controlled by Republicans. Democrats control the Senate, but just barely. Despite the proposal's poor outlook, Democrats hope that the Senate vote and the debate around it will help them politically ahead of the November 6 elections by casting the Republicans and their presumptive presidential candidate Mitt Romney, himself a multi-millionaire, as the party of the wealthy.

Republicans have attacked the Buffett Rule as a diversion from the weak economy. They also argue that raising taxes on the rich would hit small businesses and discourage their growth. Here is a Q+A on the legislation and the issues behind it.

What Is the Buffett Rule?
Named after billionaire Warren Buffett, who backs it, the rule would require individuals with adjusted gross income of more than $1 million, or $500,000 for married individuals filing separately, to pay at least 30 percent in taxes. Democrats have been careful to stress that the tax would not apply to people with $1 million or more in assets, who comprise a much larger slice of the U.S. population than those with annual incomes of $1 million or more. About 433,000 U.S. households earn more than $1 million a year. That is only about 0.3 percent of all taxpayers, according to the Tax Policy Center, a research group. The bill being voted on in the Senate, sponsored by Democratic Senator Sheldon Whitehouse, would impose the 30-percent tax on adjusted gross income after a modified deduction for charitable giving and certain other tax credits.

What Is the Rule Supposed to Do?
The White House on Tuesday said the Buffett Rule was being proposed "as a basic rule of tax fairness" and that many high-income Americans pay less than their fair share of taxes.

A few months ago, the Obama administration offered the rule as a substitute for the Alternative Minimum Tax (AMT), but congressional tax experts later showed that the Buffett Rule could not raise enough revenue to replace the AMT.

Do Top Earners Pay Too Little?
Taxpayers earning more than $1 million a year pay an average U.S. income tax rate of nearly 19 percent, according to the Tax Policy Center. The top individual tax rate is 35 percent. Loopholes and other deductions help lower that rate so that most Americans pay a much lower effective rate. A middle-income earner making between $50,000 and $75,000 pays an average 5.7 percent effective rate, while a low-income worker making between $10,000 and $20,000 pays no income tax. Effective rates vary wildly within income groups, however, with some people paying far less than average and some far more.

Critics say this underscores the need for a minimum tax. About 65 percent of taxpayers who earn more than $1 million face a lower tax rate than the median tax rate for moderate income earners making $100,000 or less a year, according to the Congressional Research Service, based on 2006 IRS taxpayer data. Warren Buffett has said he pays a lower effective tax rate than his secretary, who sat next to first lady Michelle Obama at January's State of the Union speech. Obama's campaign website has a section dedicated to explaining the Buffett Rule and calling for its passage.

How Much Revenue Would the Buffett Rule Raise?
The Buffett tax would raise $47 billion from 2012 through 2022 if imposed on taxpayers earning more than $1 million, or $500,000 for married individuals filing separately, according to a March memo from the Joint Committee on Taxation, a nonpartisan body that estimates tax changes for lawmakers. Critics note that the additional revenue would do little to tame the $1.2 trillion federal budget deficit that is forecast for this fiscal year, which ends on September 30. Proponents say every little bit helps and the bigger issue is fairness.

Would Romney Or Obama Pay the Buffett Tax?
Romney is the sort of person at whom the Buffett tax is aimed. In January, the Romney campaign released tax documents that showed the Romneys paid an effective tax rate of 13.9 percent in 2010 and an estimated 15.4 percent effective tax rate for 2011. Romney, a co-founder of buyout firm Bain Capital, earns most of his income from investment profits, dividends and interest. These are generally taxed at much lower rates than wage income, which is the sort of income most Americans depend on.

Romney's 2010 returns and estimates for 2011 showed he will pay $6.2 million in taxes on income of $42.5 million. Romney reported about $13 million in income over the past two years from "carried interest," a form of earnings that is available to private equity partners and taxed at the 15 percent investment income tax rate, not the higher wage income rate. Obama on Friday released tax returns for 2011 showing he paid a 20.5 percent effective tax rate on $789,674 of income, so he would not be subject to the Buffett Rule.

Why Is the Senate Voting Again?
The Democrat-controlled Senate has voted many times on measures to raise taxes on the wealthy and each time the legislation has been killed because it lacked the 60 votes needed to overcome procedural hurdles in the 100-member Senate. So why is Senate Majority Leader Harry Reid staging yet another vote, knowing Republicans will again block it? There are a few obvious reasons: With millions of Americans scurrying to file their annual tax forms by the April 17 deadline this year, it's an effective way of again focusing attention on the "fairness" issue that Democrats are emphasizing in the 2012 political campaigns. More importantly, recent public opinion polls show that a clear majority of Americans favor raising taxes on the rich. So, leading up to the November elections, expect more votes in the Senate on similar "tax-the-rich" measures.