Illegal Crossings Up 9 Percent – No Wonder the GOP Is Leery 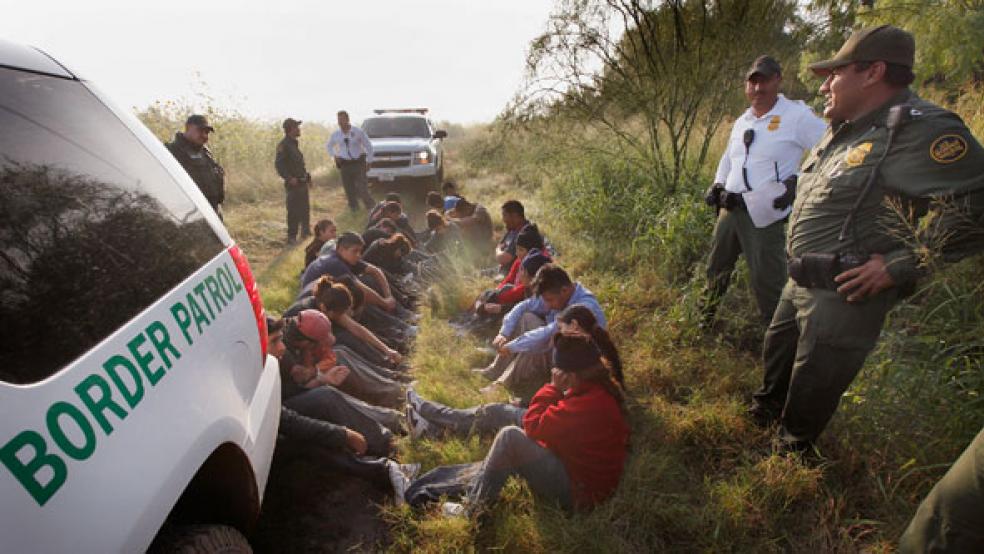 While Americans anxiously scan their gizmos for signs of e-surveillance, thousands of illegals continue to jump the fence at our borders undetected.

Increasingly, it looks like the bipartisan push for immigration reform may founder if the Obama administration cannot convince Congress – and especially Republicans – that our borders are secure. Are GOP hold-outs being obstructionist, or are they right to question the White House’s reassurances about ongoing illegal immigration?

Republicans are demanding that in return for providing a path to citizenship for the eleven million immigrants in the country illegally – what skeptics call “amnesty” – the Obama administration must guarantee a certain level of security along our borders.

Despite Janet Napolitano’s head-scratching assurances that “the border is as secure as it’s ever been,” the agencies involved are waffling. Napolitano, head of Homeland Security, pledged two years ago to develop a rigorous security standard and declared that the former term “operational control” was outmoded.

That was about the time that the Government Accounting Office pointed out that even for that rare portion of the border (roughly 15 percent) where DHS claimed 100 percent operational control, 10 percent of the illegal crossings were never caught. Napolitano vowed to establish a new measure that would reflect security and quality of life along the border. Such a yardstick, she said to Congress, would be “based on reliable, validated numbers and processes. It must tell the complete and statistical story.”

Frustrating both Democrats and Republicans, DHS has failed to develop such a matrix. The Obama team said in March that they resisted establishing such a measure, not wanting to throw “hurdles” into the pathway to eventual citizenship. Addressing Congress in March, Peter Boogaard, spokesman for the DHS said, “…border security is complex and cannot be measured in a single metric…” He went on to claim, “We’re heading in the right direction,” citing “decreased apprehensions and increased seizures.” Some might argue that decreased apprehensions might also result from sending our border patrol agents to Disney Land for a week or two.

Instead of providing proof of results, the DHS provides proof of effort. Testifying in April before the Senate Committee on Homeland Security, Michael Fisher, Chief of the U.S. Border Patrol, said, “Rather than focus on any particular matrix, our focus is on the enhancement of our capabilities.” This sounds like the Department of Education arguing that our students may emerge from college unable to read, but at least we’re spending billions on new school buildings.

Fisher reported that the number of border patrol agents has doubled since 2004, to more than 21,000 today, and along the southwest border the number has doubled since 2001, to 18,500. We have also ramped up investment in various detection technologies – license plate readers, drones and the like. The GAO puts the price tag for the 41,400 DHS personnel monitoring our borders at $11.8 billion in fiscal 2011, up from $5.9 billion for 28,100 in 2004. Senator Tom Coburn says, “According to one recent tally, the federal government has spent $210 billion on border security efforts since 1986.”

What to show for this lavish outlay? Fisher pointed to various indicators of success: apprehensions in 2012 in California, Arizona and New Mexico were trending down; an uptick in Texas had been met with an 80 percent jump in border patrol arrests. Country-wide, apprehensions totaled 364,768 – 78 percent below their peak in 2000, and down 50 percent from 2004.

Those numbers look good, unless we consider that the recession, record numbers of deportations and tougher workplace enforcement have discouraged illegals from trying to get into the U.S. It tells us nothing about what percentage of those sneaking into the U.S. were apprehended, or how many made it through. The GAO generously concludes in a recent review that while DHS has reported progress in stemming “illegal cross-border activity”, “it could strengthen the assessment of its efforts.”

They point out that total apprehensions across the southwest border actually increased from over 327,000 in fiscal 2011 to about 357,000 in 2102. As the GAO pointed out in an earlier report, “the number of apprehensions provides information on activity levels but does not inform program results or resource allocation decisions.”

In other words, there appears little analysis of how our money is spent, and whether it is effective. Senator Coburn reported in remarks before Congress that much of the spending on technology may have been wasted – citing the infamous SBI-Net program, aka the “virtual fence” instituted under President Bush and cancelled after one billion dollars had been spent. He also noted the $240 million spent on drones, “despite DHS Inspector General finding that Customs and Border Patrol was all but completely incapable of responsibly operating its drone program.”

The U.S. Border Patrol claims that 86 percent of illegals are caught before they enter the U.S. As a recent op-ed in the New York Post pointed out, that figure is based on “known crossings,” a figure calculated by the time-test, 21st century, fool-proof method of counting footprints in the sand. Using radar to calculate a more exact count, Border Patrol officials apparently derived a slightly more believable 49 percent apprehension rate.

Despite Napolitano’s claim that creating a more satisfactory performance measure is “a very difficult thing to do in any kind of statistical way,” the DHS has promised to deliver a new assessment method. The due date is November 2013, at which convenient time the White House surely expects immigration reform to have passed. No wonder the GOP is skeptical.